Happy Wednesday! I am off work this week, doing exciting things like cleaning the laundry room and grocery shopping (no joke, do I know how to have fun or what?), so instead of outfit posts, I'm sharing a few DIY ideas with you. I generally don't "do" DIY, because I'm cheap, impatient and ham-handed, so these are some pretty quick-and-dirty ideas that even the most craft-deficient person can probably attempt without wanting to throw anything out the window. Today I'm sharing my idea for making a toddler dress out of a vintage apron. 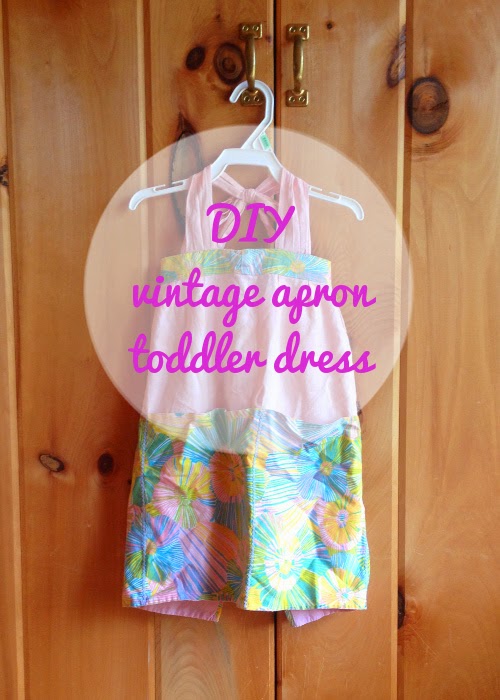 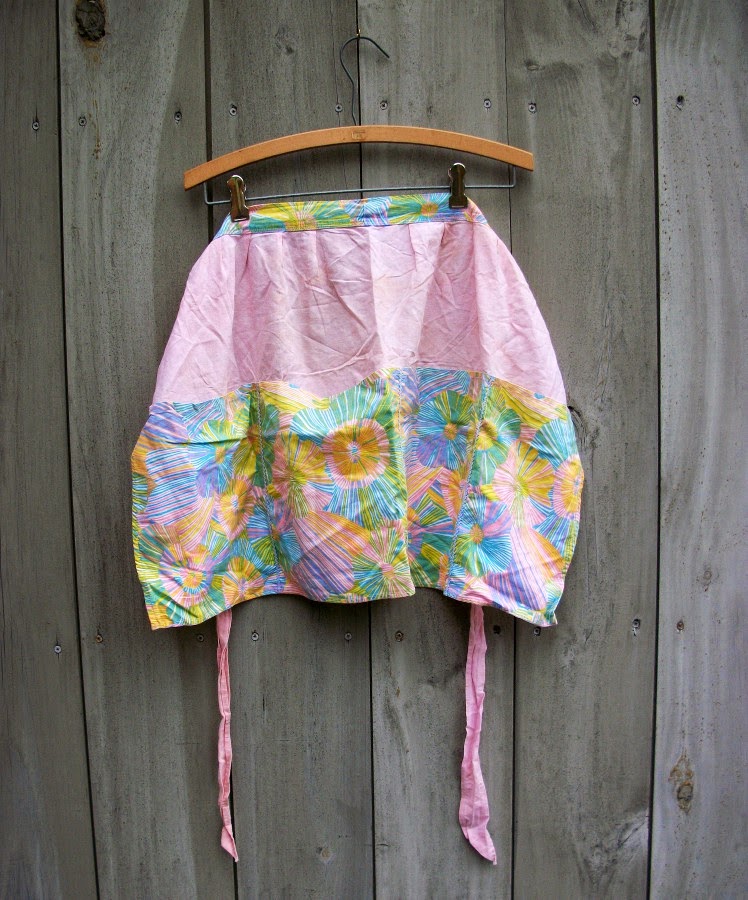 I bought this apron a couple of years ago with the intent of selling it on Etsy. However, I realized that it wasn't a good fit for my shop, so I took the listing down. It's been sitting in my rag bag (yes, I have one of those even though I don't own a sewing machine) for a few months, but I got a wild hare about turning it into a dress for my daughter, so I decided to give it a whirl. 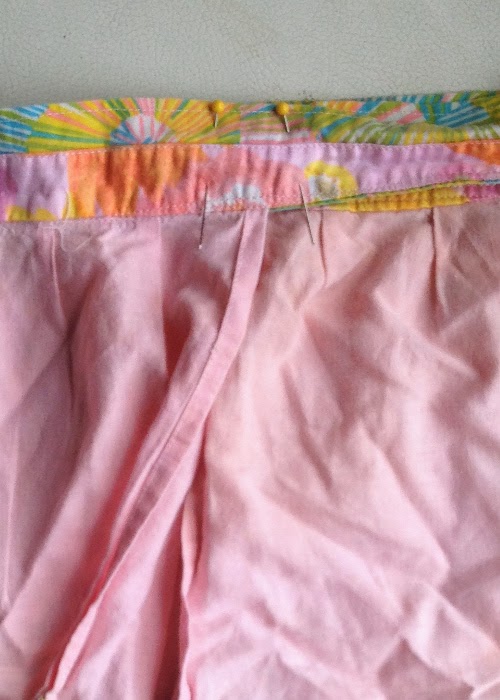 The first thing I did was get out one of my daughter's dresses for comparison. Fortunately, she has one in a similar style to what I had planned to make: a woven cotton dress with straps attached to a band at the top. Using this dress as a guide, I pinned the apron together at the back, overlapping by about an inch, to form the top band. 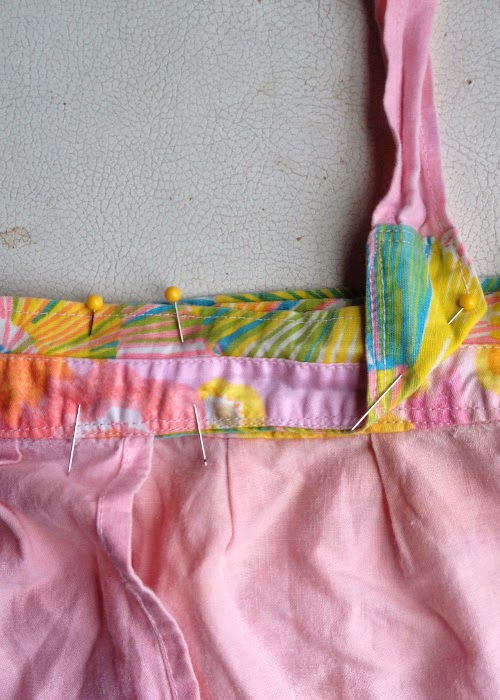 I planned to use the apron strings as straps, but I had to reposition them a bit so they would be spaced out evenly across the back of the dress. I laid the straps flat along the top band, and then folded them over at a 90-degree angle, pinning it along the fold. (If I weren't lazy, I would have ironed it, too, but screw that.) 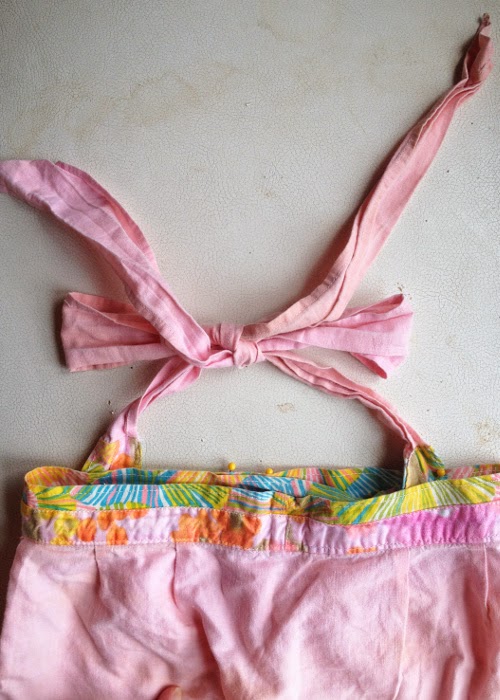 There was still a lot of length to the straps — more than I needed to reach the front of the apron. I decided to tie the straps in a bow before bringing the ends forward to the front and sewing them down. Not only does this add a slight decorative touch, it will also allow me to (at least slightly) adjust the length of the straps if needed. (You could achieve the same thing by doing straps that button on, but, again, lazy/impatient here.) 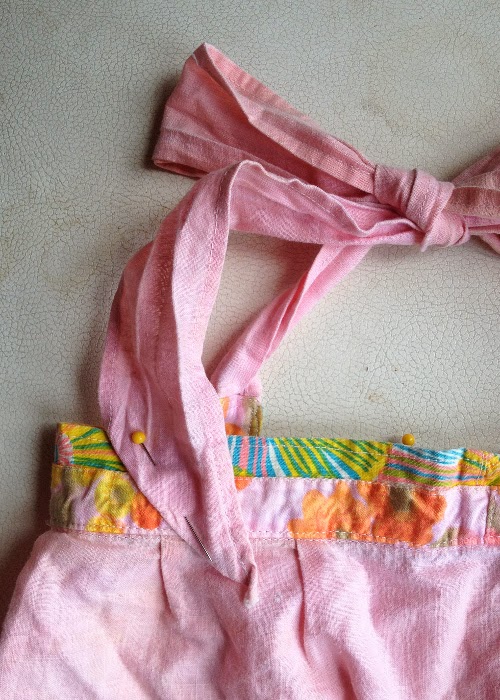 After tying the bow, I brought the ends forward to the front of the apron and pinned them so they were even with the back. 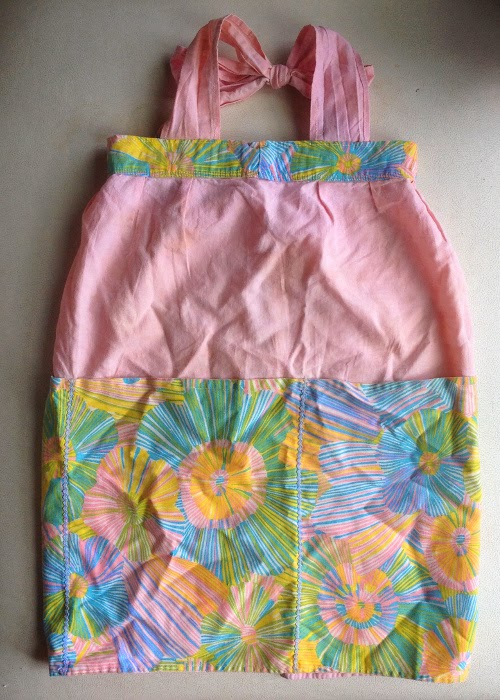 The rest was pretty simple — I sewed down the ends of the straps (including the 90-degree turns that I made) on both sides, then sewed the apron together at the back. (You could also do buttons on the back, which would make for easy on-and-off). The dress isn't fully finished in the picture below because I had to run to pick up my daughter, but I actually kind of like this smock-like treatment, too. 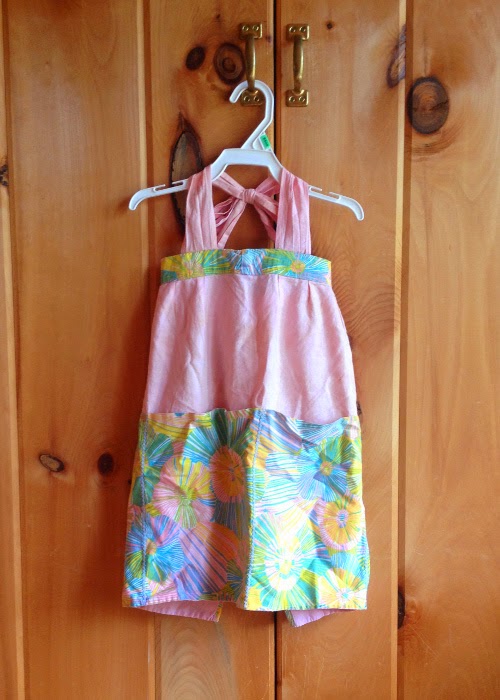 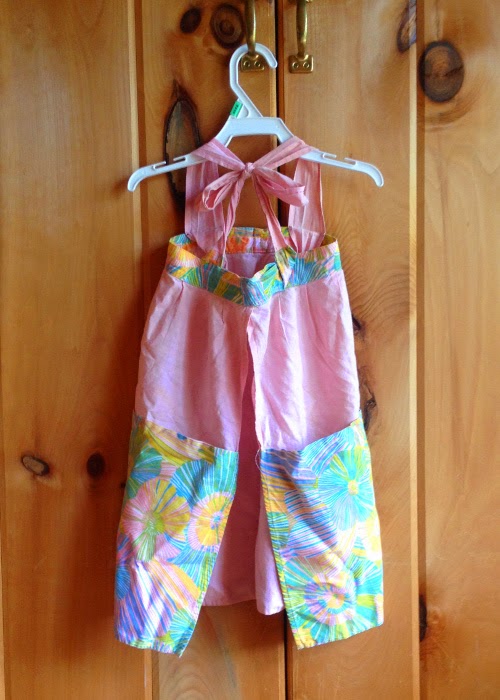 I think this is a cute way to repurpose a vintage (or just a pretty) apron that may be past its prime. You could easily cut off some length and make a shirt, too. The best part about this one is, it has HUGE pockets! My daughter absolutely loves pockets, so I am hoping it will be a big hit. Tomorrow I am hoping to bring you a sweater refashion that I have been dreaming about for months. My daughter is at day care all day, and since I was so productive today, I've decided that tomorrow will be all about lounging around, watching Hunger Games (I haven't seen a movie since I was pregnant ... and my daughter's 2½!) and generally indulging myself in stuff I don't usually get to do.
Email Post