Five things lately (plus one)

So, I broke my camera last week as the culminating crappy event of a day of crappy events. It was just the final straw of feeling frustrated and stuck when it comes to selling vintage. I was really upset and angry about it for a while, but then I decided that I was not going to let something so simple stop me from doing what I want to do. I'm still working on some new listings, but in the meantime, here are a few Instagram snaps from the past few weeks to show what I've been up to:

As if it wasn't silly enough that I bought some vintage fabric a few weeks ago at a church sale, I then bought a vintage pattern to go with it. I don't sew, and don't own a sewing machine. So of course this totally makes sense.

2. Took a bunch of crappy photos.

I tried like 27,000 different photo setups last week, and hated all of them. Part of it was the limitation of having things on hangers, so I finally caved and ordered a small mannequin torso on eBay. Then the next day I saw a lady selling vintage dress forms on Craigslist for $10. Dammit. (Edit: I'm keeping the eBay dress form - it is actually working out great! And the Craigslist lady fell through.)

3. Did some more slave labor, aka knitting.

This little devil is the latest in a series of seed-stitch cowls I'm whipping up to sell this fall in my Etsy shop. I was desperate a few weeks ago (it seems like an eternity ago) when I finished one cowl, and grabbed this coral worsted weight yarn and a really small circular needle because it was all that I could find. Boy, do I regret that decision now. I've put so much time into this by now that I absolutely HAVE to finish it, but it's taking forever and it's absolutely killing my hands because of the tension. Thank god we have started watching Dexter again; it goes by a lot quicker with something suspenseful on the TV.

We planted cucumbers, watermelon, eggplant, strawberries and pumpkin this year, and the pumpkin plant is by far the leader of the pack. Even though half the plant is getting eaten by slugs (damn slugs — not sure why only half, either), the thing is going absolutely bonkers. I swear it grows about a foot a day. We planted it in this gross corner of the yard where (sorry if TMI) we sometimes dump the cat litter, because we don't plan on eating the pumpkins, only using them for jack-o'-lanterns if they're big enough. And boy, does it seem happy over there.

I took my best girl berry picking this morning. After reading a rapturous description of this farm near our house, I just had to check it out. It is still pretty early in the season here — the farm just opened for U-pick a few days ago — but it was still really fun to go up there and stroll around picking berries for a little while. I wasn't even really trying that hard, but we came away with about a pound and half of organic berries (beautiful ones, too) for $3.50 — not too shabby! And it just so happened that there is an awesome thrift store nearby that was having a BOGO sale ... so, yeah, I'll be posting some stuff to my Instagram shop later tonight. And I even picked up a few vintage goodies that I'll be listing with the rest of my fall stock.

Oh, and one last thing:

6. Made some money on thredUP! 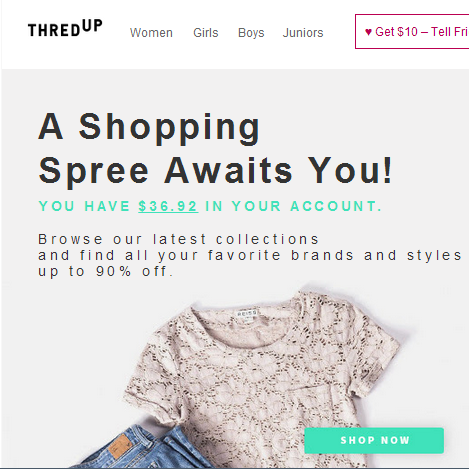 Sure, I'm no Erin from Ohio, but I was psyched to actually get a decent bit of cash from the first bag I sent in to thredUP. There are a few things I'm definitely disappointed they didn't take, but I think I still came out on top with this one (confession: I didn't actually even keep track of all the items I sent in ... I was just sort of frantically stuffing things in the bag toward the end). I already ordered another bag, and I'm trying to be more careful this time to really pay attention to condition, and to be very selective about the brands I will include (that's the hard one for me). So, wish me luck!
Email Post